The Sony Xperia Z is Sony's high-end flagship smartphone for Q1 of 2013. It a rectangular shaped smartphone with Sony's Omni-Balance design, making a departure from the 2012 devices, especially the flagship Sony Xperia S. It has a very premium look and feel, as the front and back panel are made of glass. It also features an Omni-balanced power button made of aluminium on the right. It is officially unveiled at CES 2013 and was released on 1st of March. 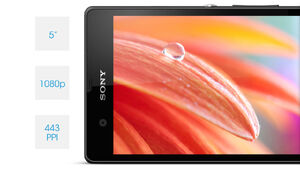 life those accurate colours and sharper photos captured on the 13 megapixel camera. Sony have brought the touch panel closer to the display, this OptiContrast panel makes for less reduction and clearer viewing whilst also giving you are far more intuitive experience. The screen itself is scratch resistant, as you would expect of a device that has an IP55/57 rating, making it a very durable smartphone.

Sony has always produced good quality cameras on their smartphone and the 13 megapixel fast capture camera on the Xperia Z is no exception. Built using technology and expertise from leading cameras from Sony such as Exmor RS sensor for mobile, this will not fail to impress. The worlds first image sensor with HDR video for smartphone the camera lets you capture sharp photos and full HD video, even in bright sunlight.

With video calling & self portraits becoming ever more popular the Xperia Z caters for this too with a front facing 2.2 megapixel full HD camera. To ensure the best images are captured at all times, Sony have built in Superior Auto mode which is optimised for 36 different scenes, activating HDR and noise reduction when needed. For those hard to capture, fast moving action shots, use Burst mode and capture 10 frames per second.

High end screen and camera, next is the high end processor. A quad-core processor no less, clocked at 1.5GHz with 2GB of RAM for a super fast performance, especially when it comes to gaming and web browsing with the introduction of Adreno 320 GPU for outstanding graphics! The intelligent processor makes use of the four cores as and when it needs them to give you best performance and maximum battery life.

Retrieved from "https://ph-tech.fandom.com/wiki/Review_-_Sony_Xperia_Z?oldid=4190"
Community content is available under CC-BY-SA unless otherwise noted.